"The Corgi with a Tail" 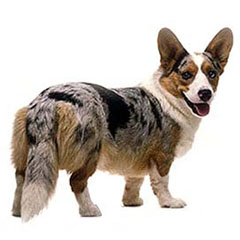 The Cardigan Welsh Corgi's roots are in Cardiganshire, Wales. There, as long as 3,000 years ago, Celtic tribes that had migrated from central Europe developed the dog's long-bodied ancestor. These dogs were originally used to chase predators away from cattle herds, but later began to work as herders and as vermin exterminators. Although some of these Corgi were crossed with a Flemish spitz-like dog to become the Pembroke Welsh Corgi, other dogs were not. These untouched dogs became today's Cardi. By the early 20th century, when dog showing became popular in England, both types of Corgis had been recognized by the national kennel club, but as a single breed. That mistake was corrected in 1934, when each type of Corgi was allowed to form its own breed club. The first two Cardis came to the United States in the 1930's, and the breed was recognized by the American Kennel Club in 1936. In July 2006, the official breed name changed from Welsh Corgi (Cardigan) to Cardigan Welsh Corgi, finally reflecting the breed's seperate status from the Pembroke. Today, the Cardi is much less popular than his Welsh brother, the 79th most popular breed compared to the Pembroke's higher ranking at number 22. Some blame the Queen Mother, who favored the Pembroke, casting the poor Cardi into the shadows of relative obscurity.

Many Cardi enthusiasts characterize their animals as big dogs in little packages. The short-legged Cardi doesn't seem to view his lack of height as any reason to fail to stand his ground when he thinks the situation calls for such behavior. His roots as a cattle dog give him a degree of confidence that belies his short physical stature. Like many herding dogs, the Cardi may be reserved when he encounters strangers. Those who know and love the breed suggest that the dog be allowed to make the first move during first-time encounters. That said, the Cardi can become deeply attached to his family. His herding roots may render him a bit of a barker, as well as a penchant for nipping at the heels of individuals on the run, be they cattle or human.

The Cardi is a small to medium-sized dog who ranges between 10.5 and 12.5 inches tall as the shoulder and weighs between 25 and 45 pounds. His short double coat can be reddish, sable, black or brindle, almost always with white markings. They have long tails and upright, bat-like ears that are rounded at the tips.

Cardis, like all dogs, respond best to positive reinforcement training. Occasionally the dog's clownishness and confidence may put him in the wrong with his people, but consistency and patience in training will triumph in the end. The Cardi has the intelligence to be trained to excel in many activities, including herding, obedience, therapy and agility (just keep those jumps low!).

The Cardigan Welsh Corgi's medium-length coat needs to be brushed at least once a week when he's not shedding. During his twice-yearly shedding seasons, daily brushing will help keep too much fur from flying. Weekly ear cleanings and pedicures, and baths as needed will keep him in tip-top condition. Like all herding breeds, the Cardi needs vigorous daily exercise to stay at his best, but because of his short legs, you shouldn't have any problem keeping up with him on walks around the neighborhood.

Like any purebred dog, the Cardi has his share of inherited health issues. Among the chief health concerns are hip dysplasia, progressive retinal atrophy, hypothyroidism and intervertebral disc disease. Dogs intended for breeding should receive OFA and CERF clearances before being bred. The Cardi also tends to pack on the pounds. The wise owner will monitor the dog's food intake to prevent excess weight gain and related health problems.

Bob Llwyd, a red and white Cardigan, was the most influential stud dog in the breed during the 1920s.

© Copyright 2014 LifeLearn Inc. Used and/or modified with permission under license.